Sorry for the lack of posts guys. Other than the past couple of weeks I haven't been able to attend the club due to real life commitments and with my appeal for photo's of games falling on deaf ears (no surprise there then) I have been unable to do any reports. Thankfully I managed to get some pics of this Saturdays games. Also there was a new lad (Craig) who seems keen on taking some pics when I am not around and sending them onto me. Fingers crossed all goes well and I can manage to maintain the blog. 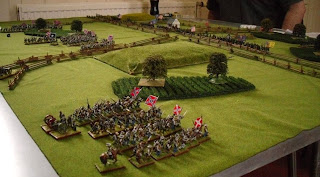 David P was due to play JP and John M at ACW this week. Somehow JP was magicked away into a world of fantasy by Stuart so David P and John M were left to fight it out alone. Like most weeks at the club however some budding disciples began to arrive to fill the gaps. 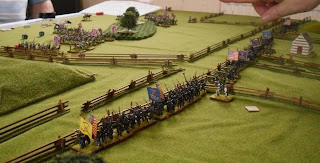 First the D man arrived fresh from his move back home to be with his fellow CWC buddies. He has been keeping his move on the down low but I had my suspicions as he kept on arriving with more and more lead soldiers each week, secretly depositing them in and around the local area!!!
(I have some of his 15mm ancients stashed in my spare room). 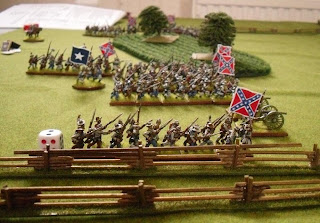 Then Jon B casually strolled in at 12.50pm (10 minutes earlier than usual!) 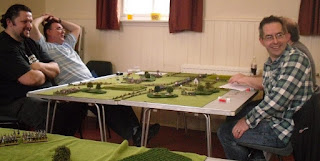 The 4 amigos, it's amazing how small the table looks next to real people (Jon B that's not a dig at you big lad!) 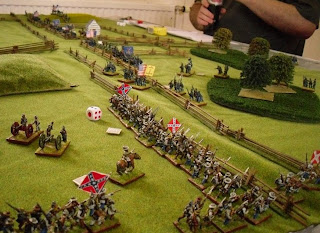 So the guys set up a scenario with the Union defending against a large rebel force and I believe the guys were rolling to see when their reinforcements returned. 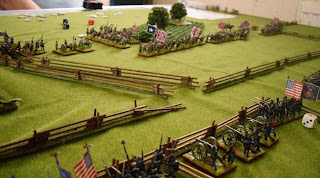 In Johnny Reb II this is usually a very scary sight, a Union 3 gun battery and infantry holding the fence line against an approaching mass of troop. Those 3 gun Union batteries can be pretty devastating! 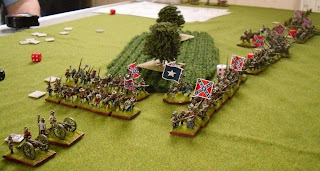 I believe all the troops on the table are from my brother David's 15mm ACW collection. 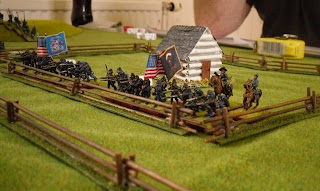 A close up of some excellent fences gifted to our club from the guys of the old Motherwell club. I do like to see nice terrain in a game. 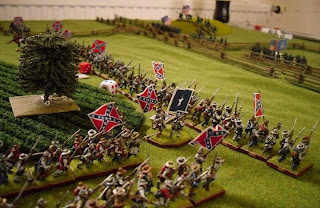 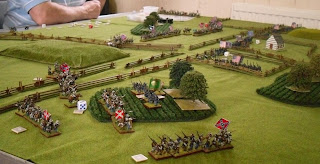 The French manage to turn the Prussian flank (sorry wrong blog). The Rebs manage to sneak round the Union flank. Usually a major problem in JR II!

The D-mans favourite figures of the day. 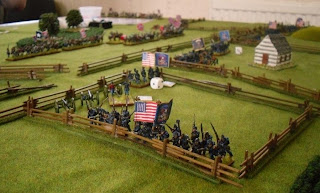 So in the end a Reb victory was declared. I wasn't paying much attention to the game but it did sound fun with lots of laughter and name calling. A usual Saturday afternoon down at the club. So I believe the centre is closed next Saturday I will find out from Stuart what dates the club will be open through the next few weeks.
Posted by Paulalba at 16:12