The Second battle on the go in our new home of the Tom Craig Centre, Law was a large 15mm Napoleonic battle with 8 players involved and it was excellent fun. I meant to get a picture of the full layout at the start but unfortunately the pics were a little blurred so sorry guys. 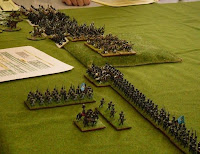 The Allies: Stuart was on the far left with his force of Russians with their own CnC. He fielded a cavalry brigade of Cuirassiers and Hussars and an infantry brigade with a six gun foot battery. 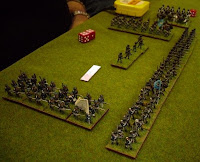 On the Allied left of centre was Von Hannah with a Silesian infantry brigade with a small unit of Life Hussars attached and a four gun foot battery. Von Hannah is a veteran wargamer but has never read the GdB rules. (an incredibly fast learner!) 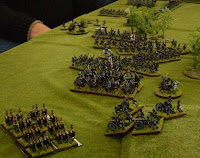 On the Allied right of centre was myself with a brigade of West Prussians bolstered with a Guard and Schutzen battalion and a four gun foot battery. (moral was high as I had just finished varnishing and basing the brigade the previous evening!). On the Allied far right was David W who was actually looking for a game of 40K and was persuaded (forced) into join us.

David was in charge of the West Prussian Dragoons and a regiment of Russian Cuirassiers that looked more like 10mm than 15mm?
(I believe Stuart will be changing these guys in the near future).

The French : In charge of the French right was David P snr with a light horse brigade of 3 regiments (Dragoons, Hussars and Chasseur a Cheval) with a horse battery attached.

David was also in charge of an infantry brigade with foot battery. So quite a strong force facing Stuarti Neversaydieski!

Facing me in control of the French centre was (my nephew) David P jnr. Fielding a mixed bag of Young and Old Guard and 3 battalions of line.

All 3 guard battalions were either painted or based up by myself so I feel it was particularly unfair that they should have been used against me!

On the French left was a late substitution, Chris took charge of a pretty powerful looking Cuirassier brigade and a pretty small infantry brigade. So the scene was set for the showdown, a clash of european superpowers, combat of nations, battle of giants! You get the idea.
To be continued . . .

A little side note: Initially it was JP who was going to be commanding the French left and we had a little challenge laid down between us from the night before, I could see the sweat running down his brow as we were setting up so it was no surprise to me when he relinquished his command to Chris! (In fairness he did have to leave early for work and he done a great job of keeping us right).
Posted by Paulalba at 10:08